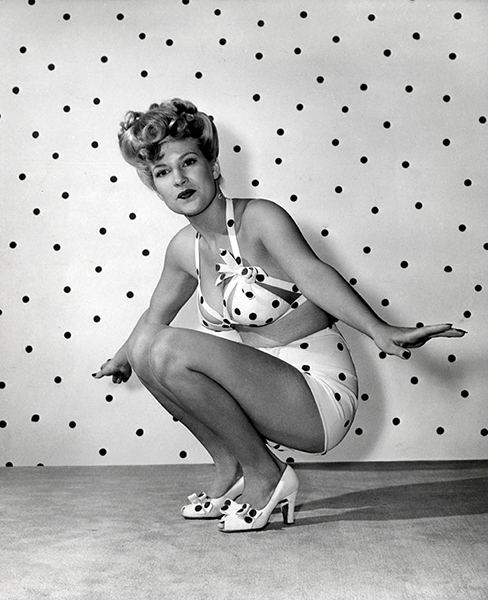 Chili Williams‘ bio is taken from

Chili Williams – the girl in the blue and white polka dot bathing suit – is very sorry, boys, but she just can’t send you those photographs you requested by letter, wire, airmail special delivery, V-mail and carrier pigeon. At least not until she gets $2000.

Score to date is 100,000 requests for her photograph in that polka dot bathing suit, she says. Fan photos cost $20 a thousand.

“I haven’t even got the money to buy the stamps,” she admitted, ruefully.

Chili Williams is the girl who landed in the movies – on her second try – after her picture in that polka dot bathing suit appeared in a national magazine and made her the No. 1 pin-up girl of the armed forces.

Her first try in front of the movie cameras wasn’t so good. Warner Bros. brought her from New York for a screen test. They gave her a little coaching and then had her play a couple of scenes from “Kitty Foyle” and “Old Acquaintance.”

“It was heavy drama,” Chili said. “I had never acted in my life. I was scared silly. A couple of directors thought I had possibilities, but the studio didn’t sign me.”

Later Chili signed with RKO at a modest salary but with a promise of good roles. She will make her screen debut soon in the Pat O’Brien picture “Having a Wonderful Crime.”

Despite all the publicity she received, Chili didn’t do so hot financially until she landed that RKO contract. She signed a release when photographer Krainin took her picture in that bathing suit. Just the other day she was walking along and saw the picture on a billboard, helping advertise a soft drink.

“I got mad,” Chili said, “but there was nothing I could do about it. I had signed that release.”

Her real name is Marian Sorenson. She’s 22, was born in Minneapolis of Danish parents, who have been divorced for “years and years.” After graduating from school, Chili Williams went to New York to become a Harry Conover model. Harry gave her the name of Chili. Not because she likes chili, but because he gives all his models tricky names like Choo-Choo Johnson and Happy Holiday.

“Somebody,” Chili said, “told me he dreamed up the name Chili Williams a couple of years ago. But he didn’t find anybody it would fit until I came along.”

Working with photographer Krainin was Chili‘s first big job. The photo in the polka dot bathing suit was one of many but it was the one that clicked.

Chili shares a Hollywood apartment now with another New York model who landed a film contract. She drinks two quarts of milk a day, is a natural blonde, has a mole on her chin, collects maps and does needle point.

She doesn’t like clothes. “I run around the house in as little as possible.” Sometimes, Chili admitted, she doesn’t wear anything at all. She has a brother in the Navy and a 20-year-old sister back home in Minneapolis.