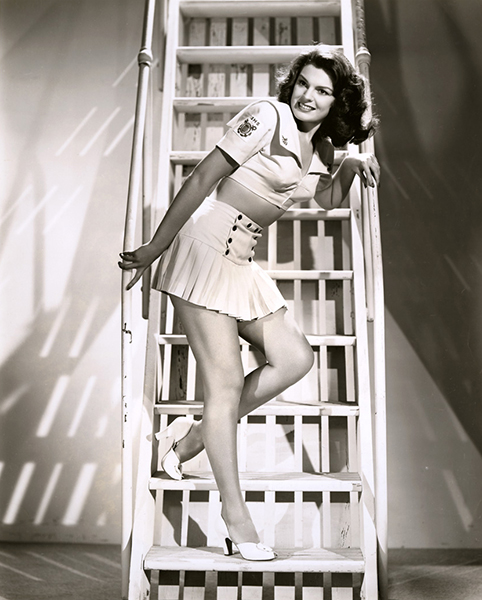 The 32-year-old blonde was found dead in her bed, clad in a pink shorty nightgown and white panties. There was a quantity of pills nearby.

[Note: Baggett was actually a couple of months shy of 36-years-old when she died.]

Police attributed her death to an overdose of medication pending an autopsy.

Her nurse, Darlene Jones, told police the actress had asked her not to come to her Hollywood apartment until late Tuesday because “she wanted to get a lot of rest.”

Her death ended a career once considered promising but marred by a broken marriage, court battles, personal tragedy and illness.

She came to Hollywood as a 19-year-old starlet from Wichita Falls, Tex. She never became a star although she appeared in supporting roles in many films.

Miss Baggett married producer Sam Spiegel in 1948. Four years later, she filed suit for divorce and accused him of adultery. Spiegel countered with his own lawsuit charging her with similar misconduct. They were divorced after a bitter and costly court battle.

She served a 50-day county jail term in 1954 for hit-and-run driving after her car hit a station wagon, killing a 9-year-old boy and injuring four other young passengers.

The actress narrowly escaped death last June 7 from police described as an overdose of sleeping pills. Two months later she was found lying beside her bed too weak to get up. A doctor said she was suffering from malnutrition. She was admitted to hospital psychiatric ward.