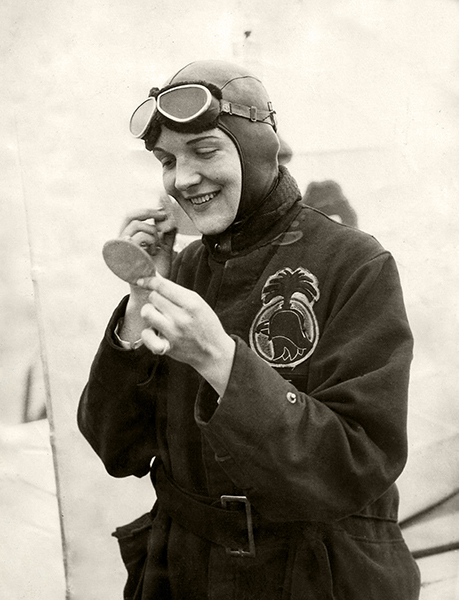 Woman Made Flight History as a Passenger

LOS ANGELES TIMES (August 11, 1982) –When Maude Campbell became, in 1926, the first woman to fly commercially, the trip represented more an act of heroism than an expedient way to travel.

She had heard through friends that Western Air Express had decided to carry paying passengers on its Coast flights and on June 10 arrived at a designated spot outside Salt Lake City for the inaugural flight to Los Angeles.

What she found was a primitive hangar, a rain-soaked airstrip and one of Donald Douglas’ M-2 biplanes.

As rain fell into three open cockpits that normally contained only the pilot and mail sacks, Campbell put on goggles, leather helmet, and flying suit that she had borrowed from the National Guard.

“I was given a parachute,” she recalled in 1976 on the 50th anniversary of the flight, “and told to jump if there was trouble, then to count to 10 and pull the ripcord.”

Her pilot, Ava DeGarmo, sat in the cockpit closest to the tail while Campbell, surrounded by mail bags, was in front of him.

Once aloft they could not communicate because of the engine’s roar but DeGarmo did hand notes to his passenger, who had stuffed two powder puffs under her helmet to try to reduce the noise.

One of the notes told her how to adjust to sudden and frequent drops in altitude: “Open your jaws wide and swallow, so your ears won’t pop.”

The plane refueled on an oiled runway in what today is Las Vegas and two mechanics brought Campbell a Coke and sandwiches, included in the $180 round-trip fare.

After six hours and 27 minutes, the plane touched down at Vail Field on Telegraph Road in East Los Angeles, where newsmen were eager to assess Campbell‘s condition.

Windblown and red-nosed, she lowered herself from the cockpit to receive a bouquet of gladiola from the president of Western Air Express, now Western Airlines.

She returned to Salt Lake City a week later but eventually settled in Los Angeles and worked for the old Rapid Transit Co. for 32 years, retiring in 1968. Maude Campbell died here Aug. 6 at 83.