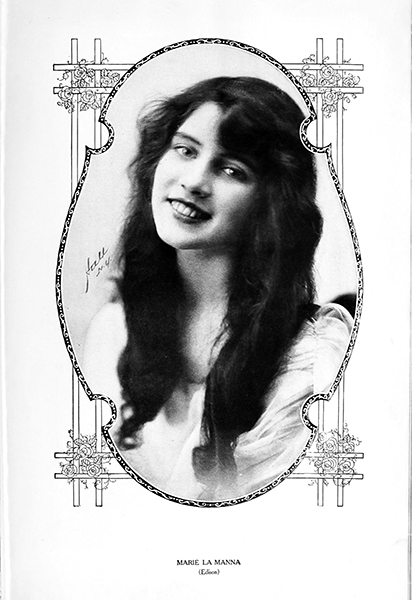 Marie LaManna (occasionally spelled La Manna) was an ingenue, who worked briefly at the Edison Company in 1914-1915.  Although she was of exceptional beauty, her film career was short.

She was born on August 6, 1895, in New York City. Her father was an Italian immigrant who worked as a chef in a New York restaurant. Her mother was born in Ireland. As a child, her parents called her Mamie. She was the second oldest daughter of four girls. Her eldest sister was affectionately called Tiny. Her other female siblings were Camille (listed as Carmella in the 1910  U.S. Census) and Maller. She also had a younger brother named Theodore.

LaManna got her break in the movies at the age of 19 when she signed with the Edison Studios. Edison, however, was in economic decline at the time. While under contract, she appeared in a handful of film shorts. However, the studio did not develop her as a star and she mostly played in supporting roles. While at Edison, she became romantically involved with one of its main cameramen Horace G. Plimpton, Jr., the son of studio producer Horace Plimpton. The couple married in September 1915 and she retired from the screen.

In 1920, she lived with her family in a small, brand new home at 49 Marble Hill Avenue in Manhattan. Her husband Horace continued to work as a photographer at a motion picture studio for Pathe, Paramount and for ten years at Fox as the studio’s top cinematographer.

Horace eventually left the motion picture industry and returned to his former job as a civil engineer.  He accepted a job as a construction manager of the George A. Fuller Construction Company and moved his family to a larger, more upscale home on Gertzen Road in Ramsey, New Jersey. While there, he and Marie participated in local amateur dramatics. In 1931, she supervised and directed a local theatrical play at Ramsey High School entitled “Sailors Know How,” written and performed by a cast of female students. Proceeds from the play’s ticket sales went toward purchasing books for the local library.

In 1935, Horace Jr. (at the age of 42) succumbed to illness inside his home. Marie Plimpton, now widowed, raised her two teenaged children.

Times were not easy and in 1940, she lived with her daughter in a boarding house in Manhattan. She stated that her occupation was that of a hostess at a hotel in New York City.

It appears as though Marie neve remarried and spent the remainder of her life on the East Coast. She passed away on December 9, 1988, in Flushing, Queens, New York.