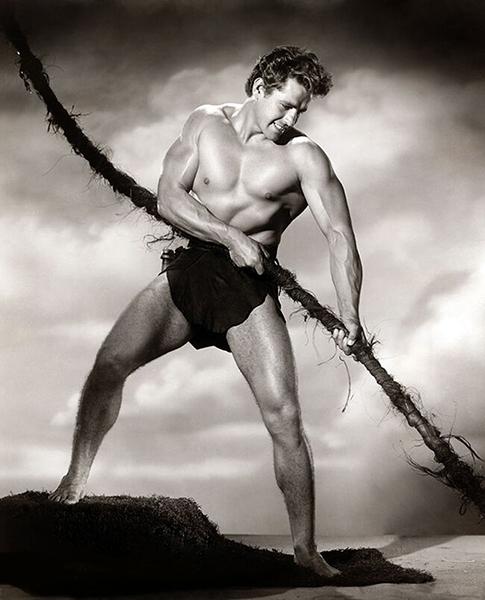 “The natives over here think we’re a little crazy. I guess this is one of the few spots in the world that had never heard of Tarzan. They can’t see any point to a fellow in a leopard skin swinging from tree to tree when it would be much simpler to cut your way through the jungle with a knife.” — Gordon Scott 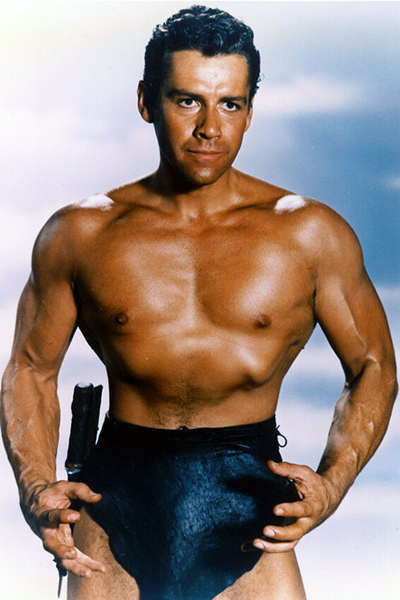 Excerpt taken from his obit:

Gordon Scott, an actor know for his portrayal of jungle superman Tarzan in six films and later roles in westerns and sword-and-sandals gladiator movies, died Monday at Johns Hopkins Hospital in Baltimore of complications from several heart surgeries. He was 80….

An unknown hotel lifeguard in the 1950s, Scott managed to beat our 200 other would-be Tarzans from across the world who had auditioned for the part by climbing trees, jumping into pools and swinging from ersatz vines for six hours.

He was an impressive physical and athletic speciman, standing 6 feet 3, weighing 218 pounds and gifted with 19-inch biceps. 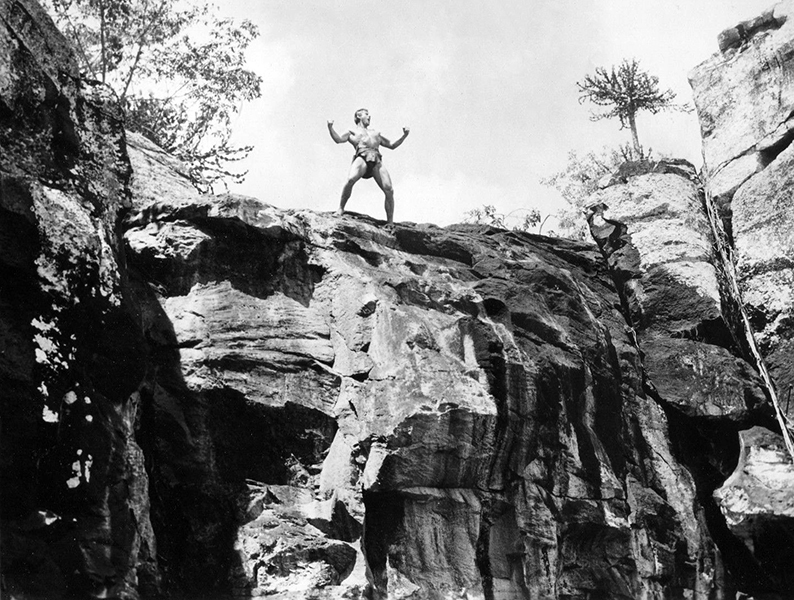 “There was a sheer drop of over 100 feet and slipper footholds to work on. Culver City never was like this.” — Gordon Scott in 1959

In 1953, he was awarded a seven-year contract by producer Sol Lesser, becoming the 11th Tarzan in replacing Lex Barker as the “Jungle King,” who was created by novelist Edgar Rice Burroughs. 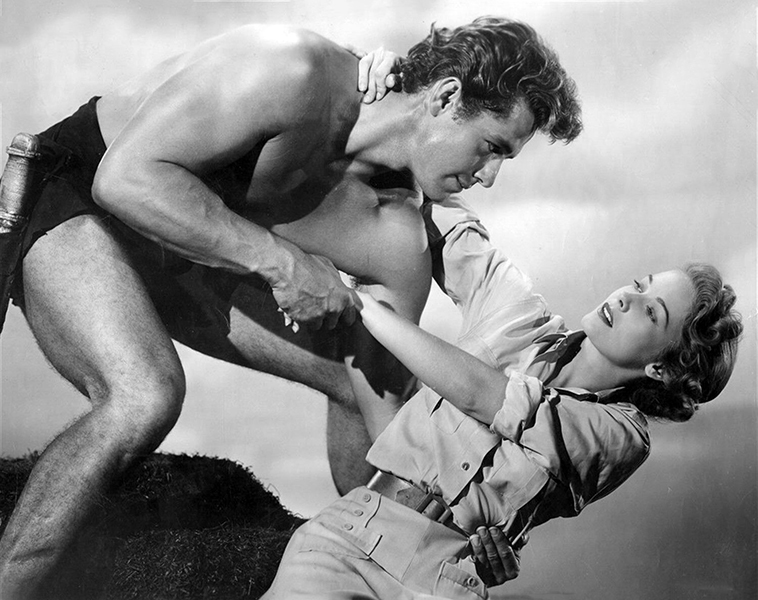 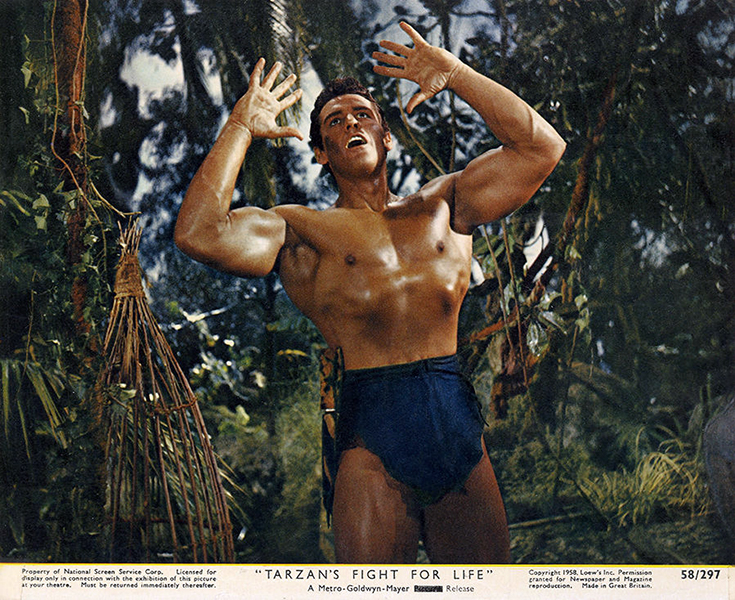 “He was an absolutely wonderful Tarzan, who played the character as an intelligent and nice man who carried himself well, much as my grandfather had originally written it. He also gave a wonderful rendition of Tarzan’s call which didn’t have so much yodel to it.” — Danton Burroughs of Tarzana

But Scott, having had his fill of Tarzan, moved to Italy in 1960 and appeared in films such as “Hercules” and “Buffalo Bill, Hero of the Far West.”

His last film, “The Tramplers,” made in 1966 with co-stars Joseph Cotten and James Mitchum, was released in 1968. 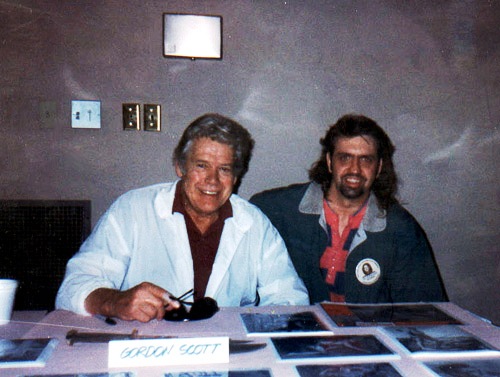 Scott supported himself later by attending autograph shows and film conventions and living off residuals.

Photo by Sir Rhosis – This is a photo of myself and Gordon Scott, taken with both our permissions (with my camera by a fellow fan) in May 1995 in Knoxville, Tennessee., CC BY-SA 3.0, https://commons.wikimedia.org/w/index.php?curid=29230791

“He was always a big spender and loved to party. If he had one weakness, it was women. They were always hitting on him.” — Rayfield Werschkull (Scott‘s brother)

In an interview with the weekly Baltimore City Paper, Scott said that being an actor “is one thing I never thought about doing, but once you’re in it, it spoils you for anything else if you’re successful at it. The money’s so easy, you meet beautiful people. My God, that’s the ideal situation – kind of a fantasy world. It’s the best way to travel, too. First class, and you get to see a lot of interesting places.”

Born Gordon M. Werschkull on Aug. 3, 1926, in Portland, Ore., he took up bodybuilding as a teenager. He attended  the University of Oregon for a year after high school and was drafted into the Army in 1944, serving as a drill sergeant and military policeman until 1947.

After the war he moved to Las Vegas, where he became a lifeguard at the Sahara Hotel. He changed his last name to Scott after landing the role of Tarzan. 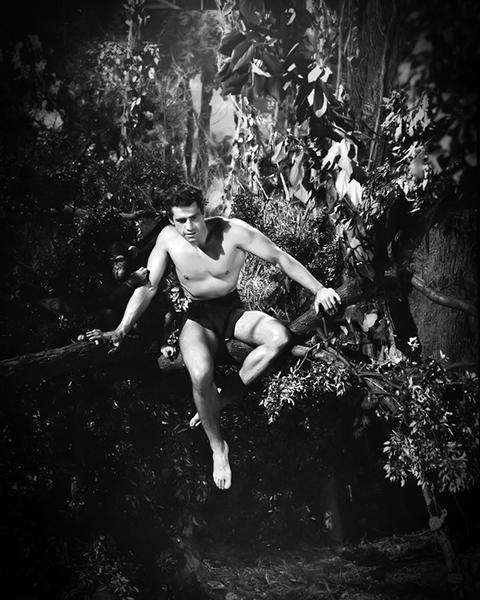 “No more grunts or ‘Me Tarzan’ talk.” — Gordon Scott