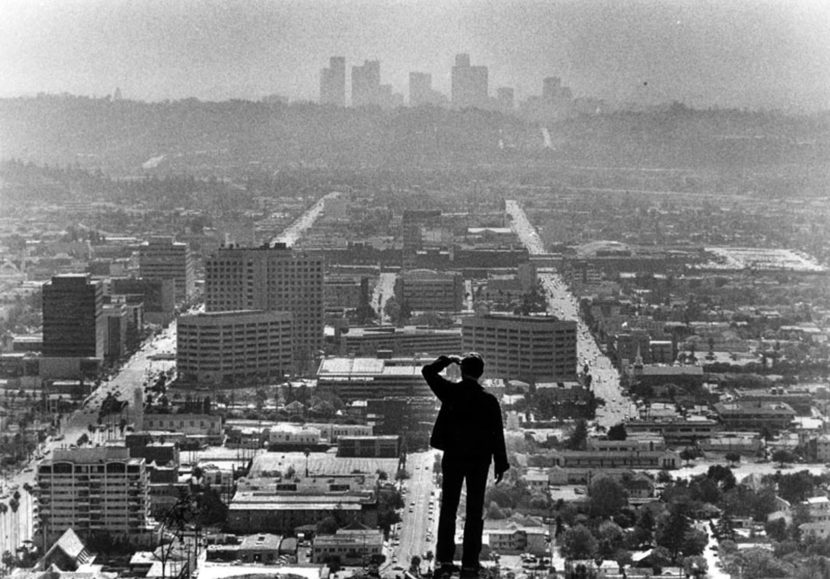 Frank Oklesson, visiting from Georgia, stands on top of a hill near Wander View and Aspen Oak Lane. Below him is a 1985 view of Glendale as well as the downtown Los Angeles skyline in the distance. (Photographer: Mike Sergieff / LAPL 00043662 ) 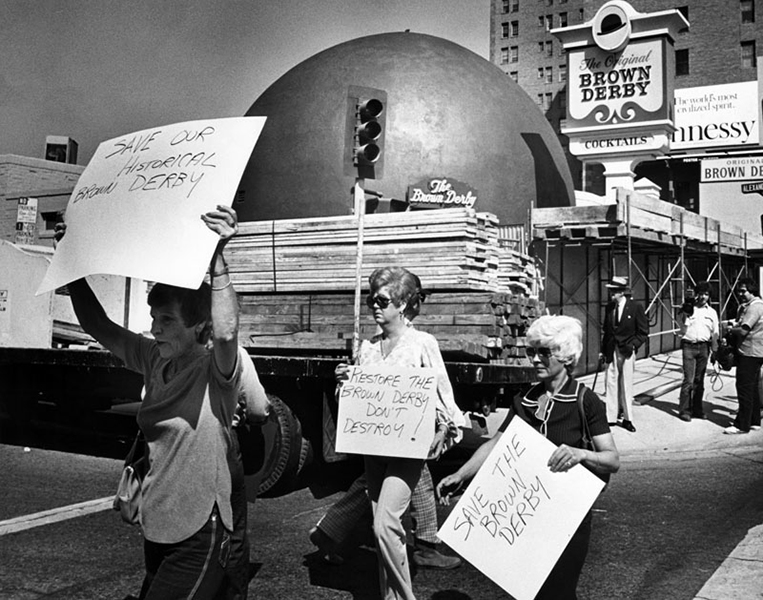 A 1980 protest to save the Brown Derby from being demolished. The fear at the time was that it would be replaced by a high-rise building. What ended up being built on the site was a mini-mall called The Brown Derby Plaza (housing mostly Korean businesses ) with the saved bowler hat hoisted onto the second level and placed in a corner. The bowler hat has changed venues many times over the years but has largely remained a restaurant space for Korean cuisine. 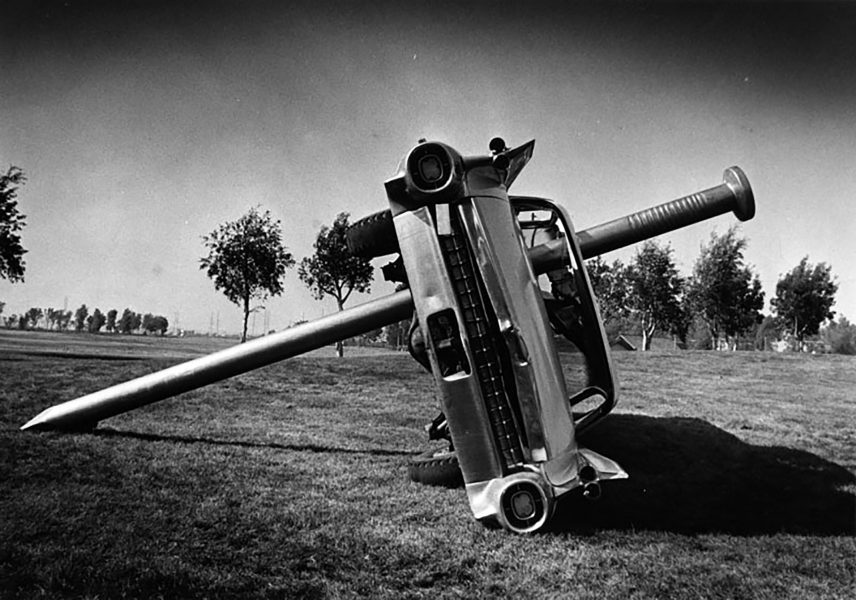 In 1980, artist Don Shuler dropped an oversized steel nail from a crane into a 1959 Cadillac sedan on the Cal State Dominguez Hills campus. He called his performance art “Death of an Era.” He stripped the Cadillac and sold its parts as souvenirs to pay for the event. (Photographer: Mike Mullen / LAPL 00078270) 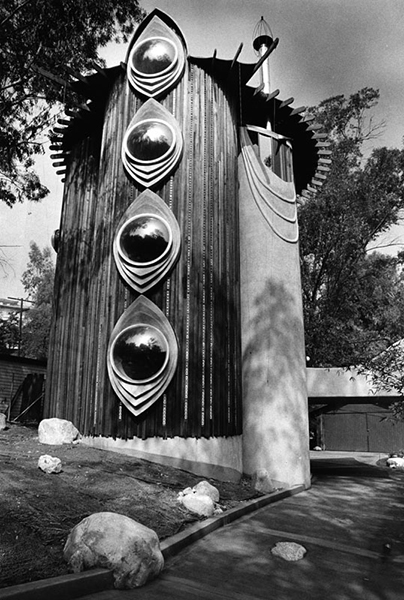 The Struckus House, located at 4510 Saltillo Street in Woodland Hills. The photo is from 1983 (the year it was built). LAPL. Photographer: Paul Chinn.

To read more about this oddity from architect Bruce Goff, click here: http://sanfernandovalleyblog.blogspot.com/2012/11/the-strukus-house-by-bruce-goff-in.html 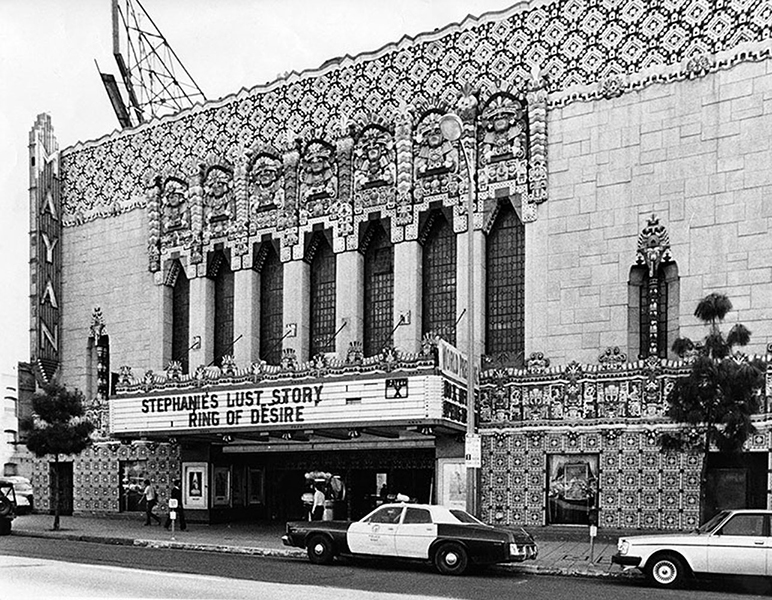 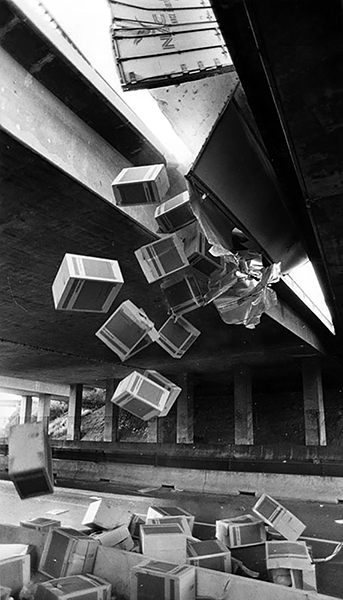 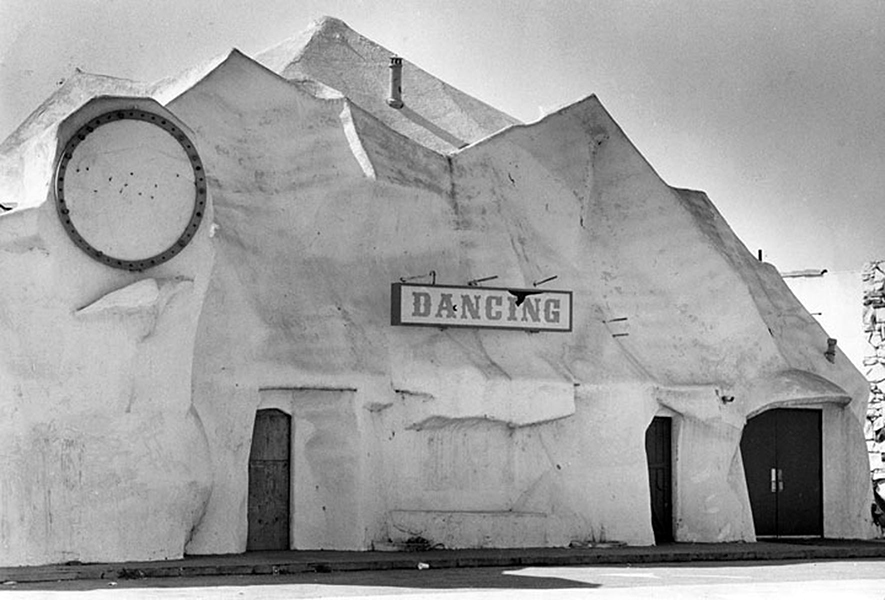 The programmatic drive-in restaurant/nightclub was originally built by Gar and Lily McOmber in 1927, on a 6.6-acre property on the 9600 block of Whittier Boulevard. During the Depression, it became famous for its special squeezed orange juice and barbeque sandwiches. In fact, it was often promoted as having the world’s best OJ.

By the 1980s, it was mostly abandoned, and the City of Pico Rivera used eminent domain to take control of the property to tear it down. Pico Rivera’s historical society didn’t lift a finger to save it. Not one finger. Its chairperson at the time, Diane Gonzales, told the Los Angeles Times, “At one time the inn brought a bit of fame to Pico Rivera. But the building is old and run-down. You can’t save everything.”

The federal government’s historic preservation department thought differently, however, and forced the city to take ample photos and to document the building’s history and architecture before razing it.

Not even a plane wreck interferes with Minnie Cook’s golf game at the Van Nuys Golf Course. The plane was attempting to land at the Van Nuys airport when its hydraulic system malfunctioned, preventing the brakes from working. The out-of-control plane sped off the runway, hit a couple of automobiles, and smashed through a fence, finally coming to a stop near the 14th hole. No one was injured, including the pilot, James Mayfield. The incident took place in June of 1985. (Photographer: Mike Mullen/ LAPL:00094894 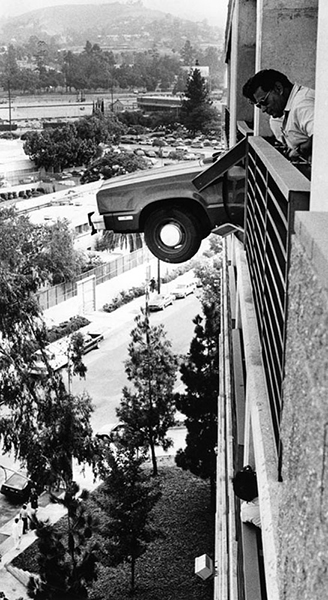 An embarrassing mishap in a parking garage near the County-USC Medical Center on July 31, 1985. The driver of a Ford Fairmont station wagon accidentally pressed the gas pedal instead of the brake, crashing through a cement barrier and metal railing. The vehicle teetered about 200 feet above the ground while the driver was able to get out of the car. What kept the station wagon from falling was a steel cable that ran along the edge of the parking garage. (Photographer: Chris Gulker / LAPL: 00094973) 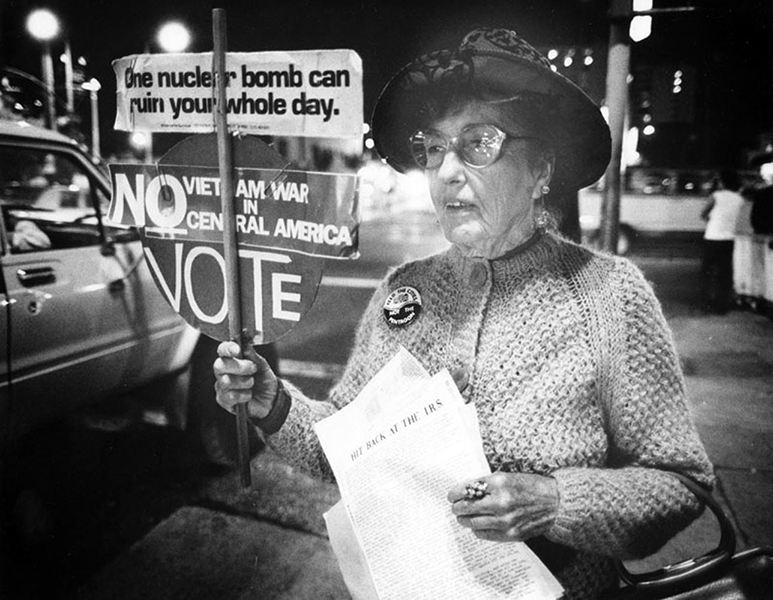 On April 15, 1986, 80-year-old Alice Schroeder protests against the IRS and a few other issues that rankled her at the time. Nothing like sending a clear message. (Photographer: Leo Jarzomb/LAPL) 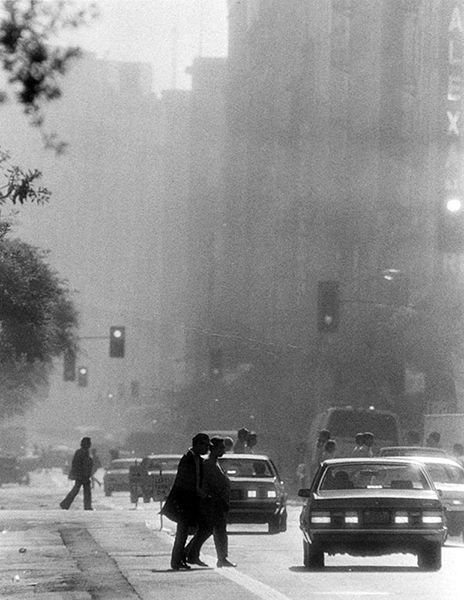 Smog on Spring Street in 1986. The Alexandria Hotel is in the distance. (Photographer: Chris Gulker / LAPL 00060080)
Liked it? Take a second to support Bizarre.Los.Angeles on Patreon!