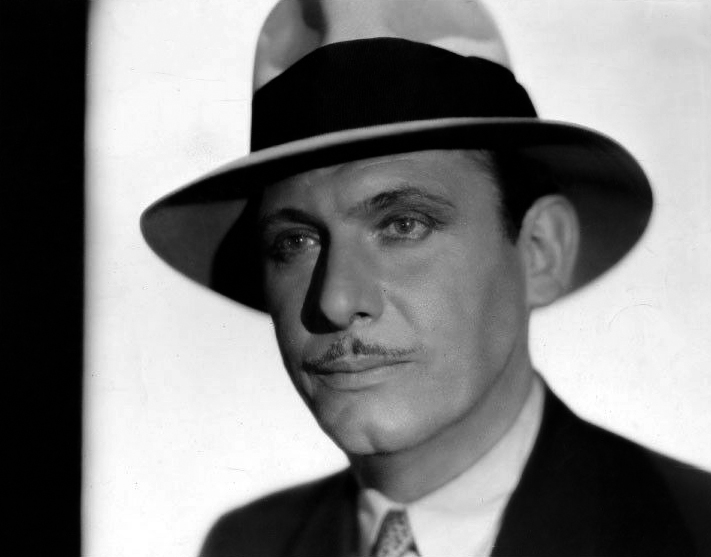 “The girl is yours when you kiss her – until you meet the next one.” — Lew Cody 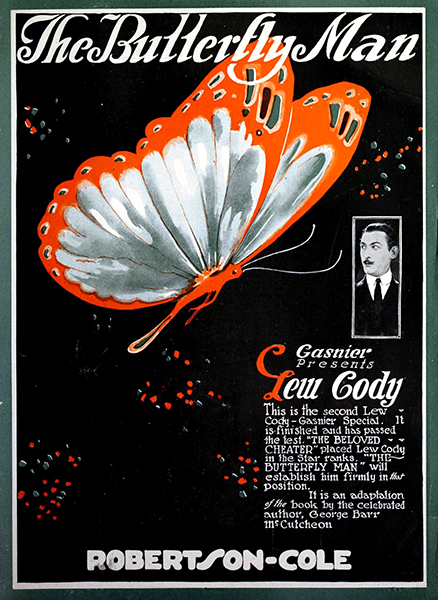 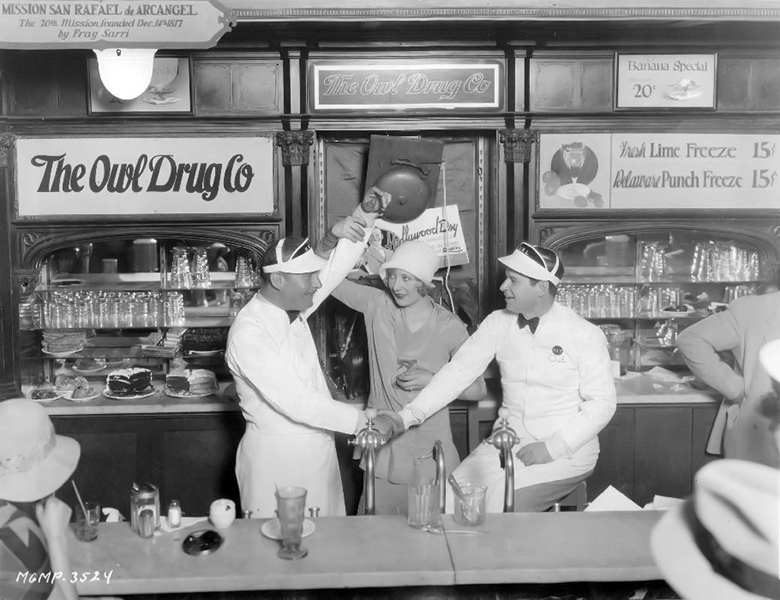 Hollywood, June 5, 1928 (U.P.) – If Lew Cody and Ralph Spence really placed a $1,000 side bet on the outcome then Lew Cody won that sum for being a better soda jerk than Ralph Spence.

The actor and the title writer met at a downtown drug store recently to settle a sundae mixing dispute and said to have arisen from the fact that they both served in such a capacity in younger and less profitable days. With each fountain, dainty dispensed by the pair went a ticket which was to be marked “good, fair or bad.” Eleven police were necessary to control the customers, mostly feminine, who sought to ballot.

Like all great battles, the malted milk contest had to have its charge of “dirty work.” Spence claimed Cody manipulated his mustache to draw in the women customers and Cody claimed that Spence bumped his elbow at the egg beater.

Then, too, some of the public thought the affair might have had a publicity angle. 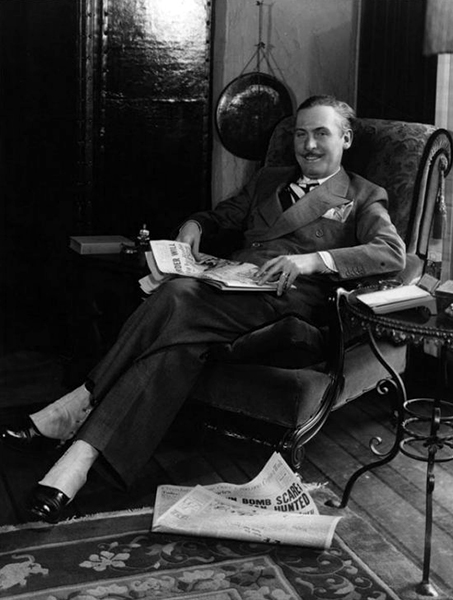 Film Actor Dies in His Sleep

Bon Vivant Was Prominent in Pictures Since Early Silents of 1915

THE LOS ANGELES TIMES, June 1, 1934 — Death yesterday wrote the closing chapter to the colorful Hollywood career of Lew Cody, pioneer motion-picture actor, bon vivant, and man-about-town. He died quietly in his sleep from a heart attack in his bedroom on the second floor of his home at 609 North Maple Drive in Beverly Hills. His butler found him dead shortly before 3 p.m. He was 47 years of age.

Dr. J.W. Young, Beverly Hills police surgeon, summoned by James Glen, butler for Cody for eleven years, made a hasty examination of the body and expressed the opinion that Cody had been dead between eight and ten hours. He was clad in pajamas and lay on his right side.

Cody returned to his home about 1 a.m. yesterday following a Memorial Day party at which he was host at his beach house. He retired immediately. It was his custom, Glen said, to sleep late and to ring him every day about 1 p.m.

“I got nervous,” Glen said, “when 2 o’clock passed and Mr. Cody didn’t ring. Just before 3 o’clock, I decided something was wrong and went to his bedroom. At first, I thought he was still asleep. But his face was discolored and I got frightened. I touched him and he felt cold. Then I ran to the telephone and called the police.”

Dr. R.B. Griffin, Cody’s personal physician, was summoned later and agreed with Dr. Young that heart disease was the cause of death. Dr. Griffin said he was willing to sign a death certificate to this effect which will obviate the necessity of an autopsy.

The body of Cody, who was the husband of the late Mabel Normand, screen comedienne was sent to the Pierce Brothers Mortuary. His business manager, Raoul Pagel, announced last night that funeral services will be conducted tomorrow at 3 p.m. from the Pierce chapel. Internment will not be arranged, Pagel stated, until the return from Honolulu of Harry Joe Brown, film director, who was Cody’s closest friend. Meanwhile, the body will rest in a temporary vault. Other details of the services will be made today.

Announcement of Cody’s death came as a shock to his friends in Hollywood. For months he had been, to all appearances, in the best health and even at the party Wednesday night he joined in the merriment with his many film guests and made no complaints of feeling badly.

A second butler, Elmer Fry, drove Cody home from the beach and, as was his custom, put his clothes away when he retired. Lee Westerman, Cody’s masseur, was waiting to give Cody a massage when Glen asked him to go to the bedroom with him.

Cody has not, as far as is known, a single living relative. His manager said he will look through Cody’s effects today to see whether he left a will.

Although he had lived as a bachelor since the death of Mabel Norman a little more than four years ago, Cody had countless friends, closest among them being Buster Keaton, Norman Kerry, Brown, Cliff Durant, Lowell Sherman, and William S. Hart.

Married twice, his first wife being Dorothy Dalton, Cody had many affairs of the heart and once, earlier in his career, acquired the cognomen of “butterfly man” because of his many conquests which not only made him talked about – important in Hollywood – but also added to the fame which took him to the highest goal of screendom, a star.

A little more than two years ago Cody’s life was despaired of when he suffered a complete breakdown. He was bedridden for many weeks but recovered. The death of Miss Normand, coming after a lingering illness, brought to him his deepest suffering.

Always a fashion plate and much sought after for parties, Cody was one of Hollywood’s best hosts. He was particularly noted for his corned beef and cabbage stag parties which he gave in a den he had specially made for this purpose in his Beverly Hills home.

His guests carved their names on one of the doors in this den and the door is a living remembrance of his popularity. There isn’t an important name in filmdom and in many other walks of life which isn’t written indelibly upon it.

Wherever Cody went and no matter what party he attended, everybody knew him and familiarity called him by his first name.

He kept right on with his picture career almost to the very last, his latest screen appearance, having been an important role in the Charles R. Rogers production, “Private Scandal,” which is now being exhibited throughout the country.

“Mr. Cody’s funeral will be unostentatious; that is what he would have wished, I am sure,” said Pagel, who has handled his affairs for the past eight years.

“I know his friends will insist on quiet and simple rites for him. Because he had so many friends the funeral services, undoubtedly, will be private and by invitation.

“Mr. Cody, the doctors believe, died without pain. There is no evidence that his heart attack even aroused him. Nothing was disturbed in the room and he was found in the same position in which he always slept.”

“His friends are shocked beyond words by the suddenness of it all. They wouldn’t believe it when the word spread around that Mr. Cody was dad, which accounts for the many telephone calls to the house.”

Cody was an Elk and belonged to the Lambs’ Club and to the Masquers.

His most recent activity was as an amateur director for Hazel Forbes, heiress of toothpaste millions. Miss Forbes became interested in making her own screen productions as a pastime and Cody directed her first picture, a two-reeler.

Cody was one of the pioneer actors who aided in the remarkable growth of the industry almost from its inception to the present time.

Coming to the Pacific Coast in 1915 as a star in the Shubert show “The Whirl of the World,” he became interested in the struggling film business and left the Shuberts here to join Thomas Ince in the production of motion pictures at the old Inceville ranch. He was leading man for years in the Ince productions and later was signed by Metro-Goldwyn-Mayer as a featured player.

The actor was born in Waterville, Me., February 22, 1887, and was christened Lew Cote, the French-Canadian name of his father. Due to the confusion of its pronouncement, Lew later changed the spelling of his family name to Cody.

His boyhood was spent in Berlin, N.H., where his father owned a drug store, one of a chain of similar Cote stores in New Hampshire and Maine. Early in life he was put to work in the Berlin store and started to learn the drug business.

In later years, Lew delighted in telling friends of his early experiences in the drug store and bragged of his ability as a soda jerker. Just to prove he was an expert Cody, in 1928, challenged Ralph Spence, local expert, to a soda-jerking contest, in which the actor finished twenty-eight chocolate sodas and six telephone numbers ahead of his rival. The contest was held for a $1000 purse.

Cody’s first paying job was in the drug firm of H.H. Hayes in Portland, Me., where his father arranged for his employment at $3 a week. His room rent was $9 a week, laundry extra, and the actor often said he was unable to save much money pending the day a short time later when he was discharged. [?]

Leaving Portland, he returned to Berlin, where he finished the public school course, after which he enrolled in McGill College, Montreal, where he studied medicine.

Medicine, however, did not interest him and at the first opportunity, he joined a stock company in North Carolina. He later owned and operated stock companies throughout Connecticut, New York, and Massachusetts.

Cody’s first New York stage engagement was in “Pierre of the Plains” and later in “The Great Divide.” He also was a leading man on the stage in “Within the Law” and other Winter Garden productions.

Quitting the legitimate stage in 1915 to enter the motion-picture business, Cody labored for several years as leading men for Thomas Ince and M-G-M., after which he turned producer and put out several feature films. He also produced his own films for a while under the Robertson-Cole banner.

In 1929 Cody made his first talking picture, “What a Widow.” From that time on he was steadily employed in pictures, having completed work in his last vehicle, “Shoot the Works,” at Paramount studios early in the week.

Between pictures, the actor turned to vaudeville and personal appearance tours in theaters throughout the nation. Always ready to bring some joy and happiness to the underdog, he was credited with having made more personal appearances in jails and penitentiaries than any other actor.

Cody was married twice. His first wife was Miss Dalton, who is now the wife of Arthur Hammerstein, New York theatrical manager.

In 1926 he married Miss Mabel Normand, film comedienne, and they were inseparable until her death on February 23, 1930, in a Monrovia sanatorium.

The marriage of Cody and Miss Normand was a sensational event even for blasé Hollywood. Suddenly deciding to get married, the couple left a Hollywood party shortly after midnight and eloped to Ventura. Cody later told friends he had only $6 in his pockets at the time and had to borrow $20 from the Beverly Hills Chief of Police and from a sleepy druggist before he could pay for a license and the trip to Ventura.

The famous autograph door (mentioned in the article) was stolen on July 30, 1934, before it could be sold at an estate sale. Autographs carved into the door included Charles Chaplin, Douglas Fairbanks, Buster Keaton, Clark Gable, Mabel Normand, Jack Dempsey, etc.

Cody’s closest friend, film producer Harry Joe Brown, sued the Cody estate in 1935, claiming that Cody owed close to $21,000 in personal loans from 1930 to 1934. Brown contended that the money had been loaned to cover medical expenses incurred during Cody’s treatment for a nervous breakdown, however, due to a lack of documentation, the full balance was denied. The Court, however, awarded Brown $8113.45 on an open account that suggested that a loan was made to Cody in 1933.