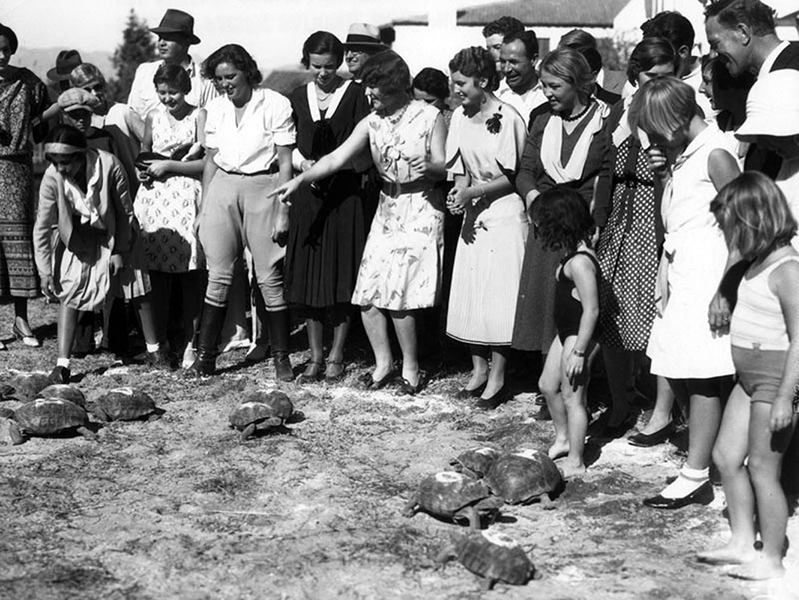 Sixteen Others, Including Tod Sloan, Freed

LOS ANGELES TIMES – September 8, 1932 –Disagreeing as to the guilt of Douglas Hertz, turtle-race promoter, a jury in Municipal Judge Clarke’s court yesterday found sixteen other defendants, arrested at the same time, not guilty of violating the State lottery laws by assisting in conducting turtle races at Sunset Boulevard and Vine street last August 23. Action on the Hertz case will be taken by Judge Clarke today.

Hertz testified the races were not in violation of the lottery law since the purchaser of the turtle at $2 was privileged to take his turtle home or otherwise dispose of it.

Police officers said that, following the sale of about 100 turtles in each race, the turtles were placed in the center of a ring and released. The owner of the first turtle to cross the ring was paid $75, they said, the second turtle $15 and third $10. The defendants admitted this, but contended the races were games of skill and not of chance.

Starting of a race was demonstrated to the jury by Ted Sloan, famous jockey and one of the defendants, who was acting as a judge of the races.

Photo demonstrates the type of turtle racing described in the article, although the location where this particular event was held is unknown. (Photo: LAPL 00064524)