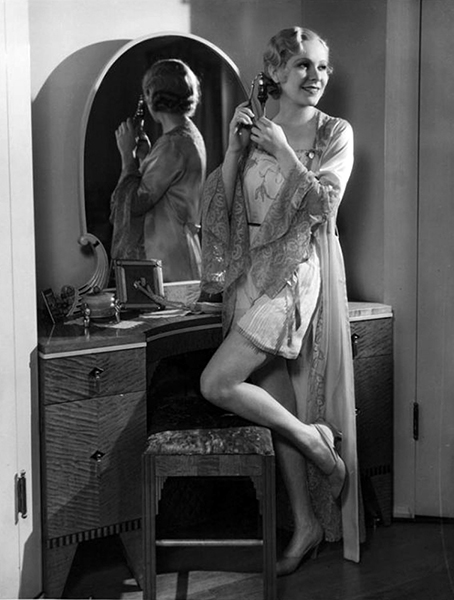 June Clyde is one of those forgotten names in Hollywood’s history. Information about her on Wikipedia, IMDb (and other websites) are either incomplete or contain a few minor errors.

Wikipedia states that she she “was born Ina Parton, the third child of William Arthur Parton and Orpha Dorothy Day,” and that “June Clyde’s career began at age seven on the vaudeville stage, billed as ‘Baby Tetrazini’ (a stage name) at the age of nine.”

Various newspapers report that RKO signed her in 1929 with hopes of developing her into a star. Her break-out film was the early musical, Tanned Legs, although top billing in the film went to Ann Pennington.

Clyde, who could sing, dance and act, was then cast in a number of other supporting roles. RKO’s happiness with her, however, is hard to gauge. In fact, it appears as though the studio downgraded her.

In 1930, she began dating Thornton Freeland, billed at the time as Hollywood’s youngest director. He wanted to cast her in his film Whoopee starring Eddie Cantor, but RKO refused to loan her out to the Samuel Goldwyn Company.

While RKO remained silent about Clyde and Thornton Freeland’s blossoming romance, studio executives probably didn’t approve of it. The couple married at the First Methodist Episcopal Church in Hollywood on September 12 1930. Around this time, RKO cancelled Clyde’s contract.

Freeland claimed that executives criticized him for trying to cast his new bride in his movies following their marriage. As a result, he and Clyde agreed never to work together.

Because she resembled Laura La Plante, her career got a boost when director George B. Seitz cast her as La Plante’s sister in Arizona (1931), released through Columbia Pictures. She made a few pictures through the independent film companies like Tiffany until Universal Pictures began hiring her in 1932. That same year, she became a WAMPAS Baby Star.

Freeland claimed that RKO wanted him to hire Clyde for for his film, Flying Down to Rio (1933), but that he had chosen Ginger Rogers instead. This may not entirely be the case. Dorothy Jordan had been slated to be Fred Astaire’s dancing partner, but she dropped out after marrying one of RKO’s top executives.

Flying Down to Rio was a huge success, but Freeland’s Hollywood career abruptly went into decline following its release. Clyde’s career also tailspinned, and by 1935, the couple began working in Great Britain, where Freeland scored another cinematic success with Brewster’s Millions (1935).

June Clyde appeared in British musical comedy films from 1935 to 1937 as well as performed on the London and Broadway stage, but newspaper articles suggest that her husband longed to return to Hollywood. The couple traveled frequently between Los Angeles and Britain during this time.

Around 1939, the year Britain entered WWII, Clyde and Freeland returned to the United States. She resumed her film career as a supporting actress in Hollywood, mostly working at Universal. She was very private about her personal life, but there was a brief mention in the newspapers that she had given birth to a son on July 20, 1940.

Back in Hollywood, Freeland directed only one American film. Following the United States’ entrance into WWII, he became a combat photographer for the Signals Corps. Meanwhile, Clyde worked with the USO, entertaining troops along the front lines in Europe.

While most biographers state that the couple remained married for the rest of their lives, this is not quite the case. Clyde and Freeland divorced in 1947, but reconciled three years later, taking new vows in 1950. The divorce years coincide with Clyde and Freeland’s return to Britain, where he made films from 1947 to 1949. Clyde starred in only one British production during this time.

After the couple remairried, she began appearing in occasional British films. Around this time, her husband’s career had ended. Clyde’s last known film appearance was in 1959.

At some point, the family returned to the U.S. and resided in Ft. Lauderdale, Florida, where both she and her husband passed away in 1987.

June Clyde was known for being a Mormon, though it is unclear as to whether this was always her religion. I don’t know what Freeland’s religion was.

Anyway, that’s all I can piece together for now, but hopefully, this information fills in a few gaps.