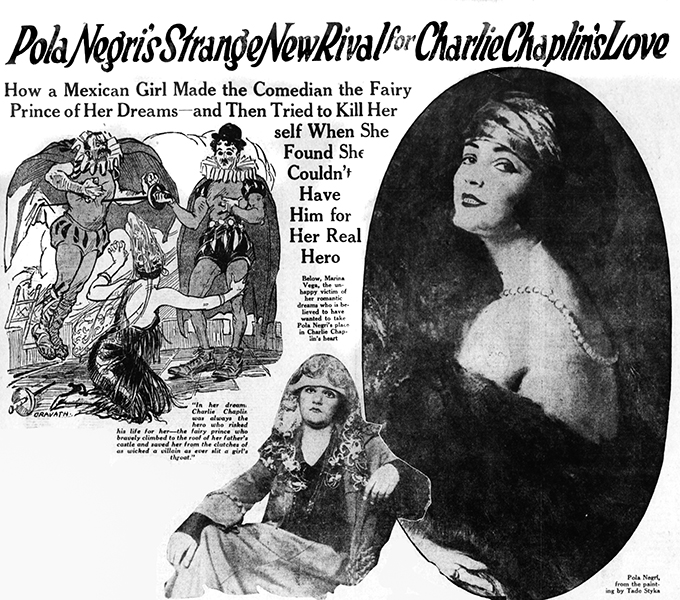 Found Lying in Street at Home of Star

A husky young Castilian senorita with cinema ambitions and a hundred-proof Charlie Chaplin complex is Marina Vega, 15-year-old belle from the calles of Mexico City, who divorced her husband of a year and came to Los Angeles to court the King of Comedy after falling love with his abbreviated mustachios, baggy breaches, grotesque shoes and rest of his makeup.

She jumped into the limelight yesterday by assertedly attempting to commit suicide under Charlie‘s bedroom window after giving the comedian and his retinue of servants three hectic days through her determination to get a personal audience with him, Mr. Chaplin says.

This is his version of the affair:

Thursday afternoon, Charlie‘s buxom admirer gained entrance to his home through the ruse of dropping a diamond ring in the shirt front of his cook who answered the doorbell, dashing by him as she was fishing for it.

T. Kono, Charlie‘s valet, and the rest of the servants were unable to dislodge her until reinforcements came from the Chaplin studio in the person of Eddie Sutherland, one of the directors there.

By dint of cajolery Marina was inveigled into one of Chaplin‘s cars and whisked back to the Alexandria.

That evening, while Pola Negri, Dr. Cecil Reynolds, Hollywood psychiatrist and Mrs. Reynolds were dining with Charlie, in came Kono, his valet, and announced that Marina had returned and was at that moment in Mr. Chaplin‘s bed grabed in his silk pajamas.

Dinner was adjourned and Dr. Reynolds aided Kono in persuading the young lady to regain her clothing and composure. They they led her downstairs and she was introduced to Charlie. She told him, Charlie says, that she had come all the way from Mexico City to see him – just to meet him.

She was cross-questioned by Charlie and Dr. Reynolds and then Mr. Chaplin told her to return to her hotel and that the next day he would buy her a railroad ticket back to Mexico City. She promised she would not bother him again, Mr. Chaplin says.

Friday Mr. Chaplin and his servants heard nothing of Marina but the twilight Saturday, just as Miss Negri, Mrs. Reynolds, Dr. Reynolds and Charlie were sitting down to dinner, Kono dashed in again with the news that Senorita Vega was lying in the street outside dying from a bullet she had sent into her brain.

She had come to the door with a big bunch of roses in her hand to give to Mr.  Chaplin and had been refused admission, Kono declares.

Once again, dinner was adjourned while Dr. Reynolds aided Charlie‘s valet in carrying Marina into the kitchen. There she told the doctor she had taken poison. The ambulance was called from the Receiving Hospital at once.

Kono’s report that Marina had shot herself he explains by saying that the moonlight made a tar-stain on the pavement near her head look like blood when from an upstairs window he first spied her body lying on the road.

At the Receiving Hospital, Marina was given the poison treatment and released, a significant question mark placed after the first diagnosis on her chart being the surgeon’s official statement in reference to her case.

A half-hour later, a Times reporter found her at the Alexandria calmly spooning ice cream. She told of her love for Chaplin and of the way she had besieged his home in her efforts to see the comedian.

“The girl’s case is very pathetic and I am willing to pay her way back to her home,” Mr. Chaplin stated last night after Kono had amplified his story of the way in which Marian had paid her court to the comedian.

Pola Negri is still ill at her Hollywood Boulevard home from the effects of the excitement Marina‘s visit to the home of her fiance has engendered.

“Mad Josefina” Removed from Room, Overlooking Home of King of Her Affections

Despite her declaration her love for Charlie Chaplin had chilled, Marina Vega, 25-year-old self-styled divorcee from Mexico City, apparently has not yet renounced her quest for the regard of the King of Comedy. Yesterday morning Policewoman Elizabeth Seely of the Hollywood division, transplanted the buxom young senora from a Beachwood Drive home, in which she had taken a room which permitted her to worship the King of Comedy from afar, to a less romantic setting on Bonnie Brae avenue – the Business Girl’s Home to be exact.

Less than a week ago, by making her way to Charlie‘s bedroom and, it is said, intruding her own rather portly figure into Chaplin‘s diminutive silk pajamas, disrupted a dinner party which the comedian was giving to Pola Negri, Mrs. Reynolds and Dr. Cecil Reynolds, prominent brain surgeon and intimate of Chaplin, when the latter’s valet, Kono, found her hiding in his master’s bed.

Two nights later, after strewing roses on the threshold of Chaplin‘s Temple Drive mansion, she ended a return engagement by draping herself across the driveway under Charlie‘s bedroom window, after assertedly taking arsenic to soothe her unrequited love.

Painstaking and thorough poison treatment at the Receiving Hospital from 9 to 10 o’clock last Saturday evening enabled her to return to the Alexandria and tell her story to reporters.

Then she declared that she was through with Charlie forever – that he was not the great man she thought him when she fell in love with his shadow-self as it flickered on the screen in a cinema palace in the Mexican capital.

Chaplin urged her to forget her “mad passion” and offered to pay her way back to whence she came disguised as a boy with her tresses shown and a plausible story, if she would desist from her perfervid demonstrations of affection. But she spurned his offer and vowed she would seek fame as a cinema actress.

Early this week, she moved from the Alexandria to the Beachwood Drive residence. Tuesday night, Charlie‘s valet, Kono, reports that her muddied shoes left a trail on the sidewalks about the Chaplin home. Every precaution is being taken to prevent her feared fourth entrance to the place. It has been intimated that unless she desists a complaint will be filed with the immigration authorities to have her deported.

Dispatches from Mexico City credit Marina with blazing a path through the night life of the Mexican capital after she assertedly deserted her husband because his talk turned to cattle and chickens rather than to gentler and more burning topics.

“Mad Josefina” was the sobriquet that habitues of cabarets there conferred upon her during her short visit to Mexico City. She is credited with capturing many hearts and the owners of many of them are reported as fidgeting since her identity and her Chaplin escapade are being disclosed by the Mexico City newspapers.

According to dispatches from Obregon’s capital, Marina was educated in Mexico City school and married Jose Rivero, a prosperous rancher, when she was young. Early last month finding farming not as engrossing as romancing, she fled from her husband’s hacienda.

Then she burst upon Mexico City nightlife for a meteoric nine-night career, astounding cosmopolites of the capital with her extravagance, vivacity and love of the bright lights; literally throwing her money away, dispatches aver.

Once she bought several hundred pesos worth of toys and distributed them among children of the street.

“She was beautiful, but oh! – how wild!” a prominent Mexican, who, incidentally, is acquainted with General Serrano, Minister of War in Obregon’s Cabinat, and Inspector General Almada of the Mexico City Police, to whom Marina wired for money shortly after she arrived here, is quoted as saying in an edition of El Corresponsal.

Her husband followed Marina to Mexico City on March 10 and had her arrested for deserting him after she had led detectives seeking her a merry chase by her assumption of a male disguise. A reconciliation followed, with Inspector General Almada in the role of peacemaker.

Previously, it is known, that Senor Almada as well as General Serrano lavishly entertained “Mad Josefina.” The former admitted that he knew the girl and said he had given her money to enable her to leave the city.

Before she left, however, she is said to have ordered a thousand pesos worth of dresses and hats sent to her hotel room. When they arrived she told the delivery boy to collect from Senor Almada, who assertedly refused payment. While the boy was enroute to her “angel,” Marina assertedly disappeared from the hotel with her finery.

Gen. Serrano has has yet vouchsafed no reply to a query as to his acquaintanceship with the ferocious flapper from across the Rio Grande, dispatches declare.

It is understood in Mexico City that among other eccentricities Marina became possessed with the idea of becoming a great motion picture star which prompted her Los Angeles advent.

From the dispatches, it is gathered that Marina‘s asserted adventure with arsenic which resulted in her visit to the Receiving Hospital last Saturday evening was not her first attempt upon her life.

Once while she was floating on the clear water of a flower strewn canal of the Garden of Zochimilco, near whiuch she was visiting, she is said to have become suddenly morose and sad.

“I seek love – petting – attention. My husband talks only of cows!” she is said to have exclaimed. And with that, she jumped into the lagoon.

This and other adventures gained her sobriquet of “Mad Josefina,” Mexico City newspapers declare.