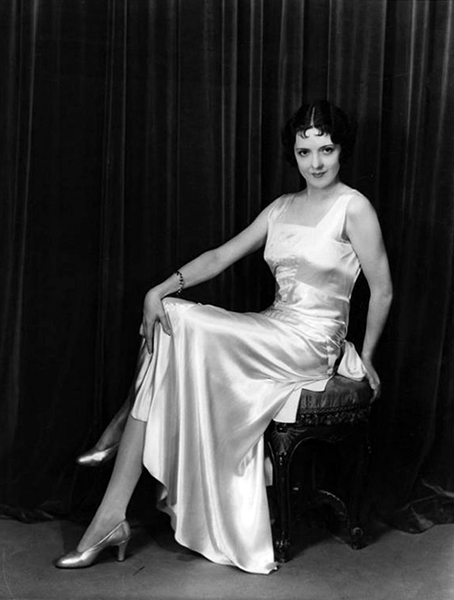 Nina Quartero is a largely forgotten film player and there simply isn’t too much written about her. I’ll try, however, to put a few pieces together about her life.

She was born Gladys Quarteraro on March 17, 1908, in New York City. According to the 1920 U.S. Census, both of her parents were Italian. She also appears to be the baby of a large family. She had five sisters and one brother.

Director James Cruze discovered her while in the midst of an exhaustive search to find the right person to star in The Red Mark (1928). As the story goes, Quartero, “slipping past the studio gateman,” crashed Cruze’s office and emerged later with a lead role and a contract. The Los Angeles Times called her a “clever little actress” in its review of The Red Mark. Although the Times reviewer added that while she did little more than weep in the movie, she cried beautifully.

Quartero, with her “elfish vivacity,” found additional work, mostly playing senoritas, French girls and other supporting roles that required an exotic look. She never came close to reaching the same heights as the more authentic Mexican-born stars such as Dolores Del Rio and Lupe Velez. After appearing in a few Charley Chase comedy shorts and smaller roles in “A” pictures, Quartero began to slip into “B” action films. She also began to work as a bit player and extra in larger pictures.

In 1930, she lived in Beverly Hills with her mother and sisters. The following year, in 1931, newspapers across the country announced that she was to wed Notre Dame’s star quarterback Frank Carideo after the two had met in Los Angeles. She told reporters, “We consider ourselves engaged to be married, but we shan’t make any plans until Frank is graduated in June, or even later, because he plans to study medicine after graduation.”

Carideo denied Quartero‘s announcement, calling it “a cheap attempt to get cheap publicity.” Quartero quickly backpeddled, stating that the engagement announcement was “Just a practical joke by someone.”

In 1933, she re-signed a five-year contract with Hal Roach. Her roles, however, continued to diminish.

Around 1937, she married advertising and publicity director Joseph C. Shea in Tijuana, Mexico. The couple divorced two years later in 1939. In Superior Court, Quartero blamed Shea for giving her a nervous condition that kept her from doing her best acting work.

Quartero again made the news in 1940 when she made a high-speed U-turn on Wilshire Boulevard near Devon Street causing a car accident. She was convicted of two misdemeanor traffic violations and wept as she paid the $25 fine. By 1943, she no longer appeared in films.

At some point in her life, she remarried and took the name Nina Q. Hook. She died on November 23, 1985. Her last known address was 4443 Pampas Road in Woodland Hills.