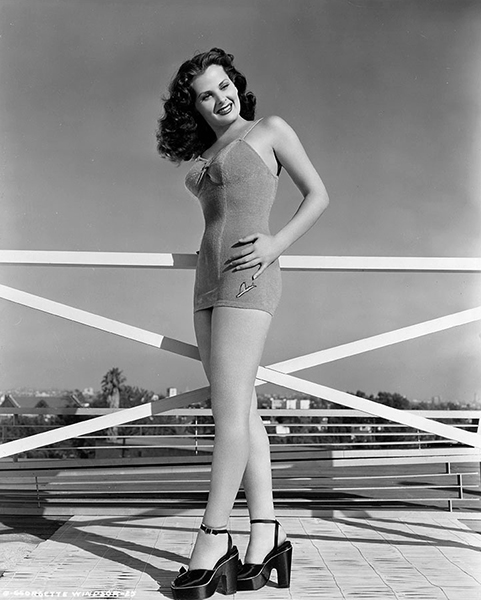 Georgette Windsor (real name Georgia Walters) was once described as a “pretty Michigan farm girl” who found brief success as a stylist, model and designer. Her big claim to fame in 1947 was her “refusal to sign a seven-year movie contract.” This statement, of course, was not true.

According to a column by press correspondent Patricia Clary:

“Like many high school girls in Attica, Ind., Miss Windsor did some sketching. When she was 18 she decided to become a Broadway designer, withdrew her meager savings and went to New York.

Miss Windsor didn’t bother asking anybody for a job. She just invested her slim funds in a swanky office, a drawing board and a sign on the door – Georgette Windsor, Designer.

Fortunately, she had a figure that helped sell her designs. She was soon in demand as a designer and a model.

She turned her eye to Hollywood, but didn’t bother to ask for a job there either. A talent scout saw her in Harry Conover’s waiting room and signed her on the spot.

Miss Windsor‘s arrival in Hollywood to play in “Down to Earth” was a press agent’s dream. On the way, her plane was forced down.

At Columbia her paycheck came through regularly but acting roles did not. So Miss Windsor got released from her contract. [Note: She would later claim that she had turned down seven film roles.]

Naturally, other jobs came flocking her way. She signed with Metro-Goldwyn-Mayer to follow Xavier Cugat from stem to stern of “Luxury Liner.”

In 1946, she briefly dated Johnny Mayer, who worked for Howard Hughes. They attended a party for Night and Day, starring Cary Grant. She later lunched with Grant at Romanoff’s. Through Mayer, she eventually met and began to date Harry Cushing IV, wealthy grandson of Reginald Vanderbilt and the nephew of Gloria Vanderbilt.

Cushing was living off a $75,000 a year allowance from a $1,500,000 trust fund left for him by his late mother. He was also “learning the movie business at Gibraltar Pictures, Inc.. without a salary.” His father ran the company.

Throughout 1946 and 1947, Cushing and Windsor had a stormy on-again-off-again courtship that eventually led to an equally stormy marriage. Because his family did not want them to marry, they eloped in Las Vegas in August 1947. Newspapers, probably at Cushing‘s urging, soon announced that Windsor would retire from films.

Not long after their union, however, the newlyweds got into a physical fight “complete with scratches, slaps, insults, et al” at Hollywood’s Macombo. The fight eventually led back to the Beverly Hills Hotel.  According to gossip columnists, Windsor “started it all, when she began to abuse Harry in front of everybody at Mocambo.” The public fight was a fiasco that led to Cushing being expelled from the social registry “for marrying the wrong people.”

After being married for only four months, Windsor left him. She filed for divorce, asking for for $1,200 a month in alimony. In court, Cushing claimed that she was already well-to-do. He told the judge that she had “$75,000, including $20,000 worth of jewelry given to her by his mother before their marriage.” He also claimed that he was broke.

The judge ordered Cushing to pay over $250 a month in alimony for four months. Upon hearing the verdict, Windsor withdrew her divorce filing and the couple allegedly reconciled. Cushing appeared to have wanted this. However, their marriage once again hit the rocks in October 1948.

In 1949, Windsor began romancing numerous people, including a cameraman, French director Leon Chameroi, Prince Raymond Lanza de Trabia, Anitole Litvac (whom she had met at the Night and Day party), etc.  She also apparently insulted Prince Mahmmoud Pahlevi of Iran by nicknaming him “Sabu.” That year, she briefly resumed her film career by appearing as the second female lead in Walter Wanger’s Reign of Terror.

In 1949, Cushing sued for divorce on grounds of extreme cruely. Months later, after Windsor began dating Texas oilman Howard Lee, she negotiated a property settlement with Cushing and went before a judge in Juarez, Mexico, and got the divorce.

Following Windsor‘s personal reign  of terror (aka, bad publicity), none of the studios wanted her. In 1950, she briefly worked public relations for the Reforma-Casabianca Hotel in Acapulco, Mexico.  On February 15, she married movie producer Manuel Reachi, the ex-husband of former silent star Agnes Ayres, in Mexico. His daughter Maria disapproved of the marriage and feuded with her step-mom. As if that wasn’t odd enough, that same year, Cushing tried to woo Windsor back by having plastic surgery on his nose after she had criticized it. It didn’t work.

In 1951, while living in Mexico, she gave birth to Victor Manuel Reachi. The following year, however, she divorced Reachi. Although she won custody of the child in a Juarez court, Reachi refused to turn over the son and contested the divorce. The Mexican court sided with Reachi, allowing him to keep their son while refusing to grant any visitation rights to Windsor.

Windsor returned to Los Angeles and her old ways: boozing it up at the Mocambo, spurning Cushing‘s advances and dating Count Sforzino Sforza and former silent film actor Paul Ellis. She never gave interviews and rarely had her picture taken for newspapers. The “fiesty” Windsor made a scene one night at the Mocamba after angrily speeding off in Ellis’ car, leaving him standing on the curb. While gossip columns claimed that the scene was part of a lovers’ spat, Ellis denied it by saying that she sped off before a photographer could take her picture. She also briefly rekindled her romance with oilman Lee, who was dating Hedy Lamarr at the time.

By 1956, she had moved to Paris for a year, where she became romantically involved with Daniel Sainte. In 1957, after hearing of Reichi’s death in 1955, she returned to the North America and was reunited with her son in Mexico. Little Manuel was still being cared for by the Reichi family.

Because Windsor was clearly rejoiced at seeing her son, she tried to find new ways to raise money. In 1959, she and Bruce Cabot unsuccessfully tried to raise money to open a Parisian Cafe in Los Angeles.

In 1960, she got permission to bring Manuel to the United States to live with her.

“My boy probably will be with me permanently now,” she told a columnist. “It’s too wonderful for words.”

Following the arrival of her son, she quickly disappeared from the newspapers.

She died in Santa Monica in December 1981.