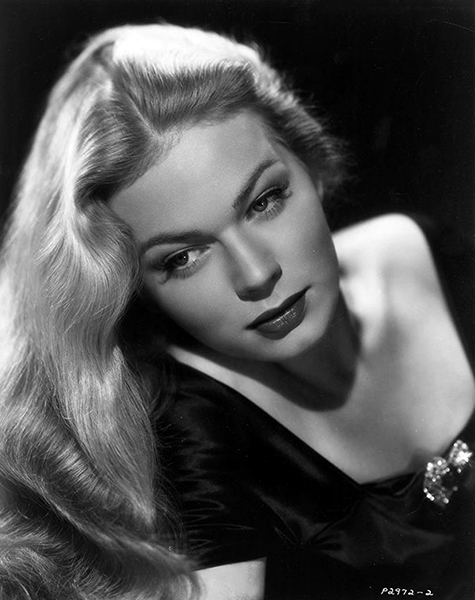 “Meet Kristine Miller, who was born in Buenos Aires, raised in Denmark and is now proudly a citizen of the U.S.A.

“The statuesque blonde with the international background stands 5 feet 6 inches tall, weighs 118 pounds, wears size 14 dress and can’t make up her mind whether her eyes are gray or blue.

“Born Jacqueline Olivia Eskesen in her mother’s native Argentina, she was raised in her father’s native Denmark, educated in France, and started her modeling career in San Francisco after her family moved to America. Now, at 23, she is Hal Wallis’ newest candidate for stardom.

“Kristine is no shy violet. She has been known to speak her mind in Danish, Spanish, French, German and good old American, which she speaks without a trace of an accent.

“It makes most happy people just to look at her. The Royal Danish Illustrators once selected her the typical “Viking Girl.” Edith Head, Paramount’s peppy designer, says she has “the most exciting figure in Hollywood.”

“Now, if someone will just nominate her a fine actress – she’ll be happy.

“She probably is the only contract actress in Hollywood who lives in a theatrical boarding house. Every now and then she takes over the kitchen and whips up a Danish or Spanish meal for the other boarders.

“The way she got her first screen test was this: Hal Wallis happened to be in San Francisco and caught her in a Theatre Arts Colony revival of Ibsen’s ‘Doll’s House.’

“Her movies – so far – are ‘West of Tomorrow’ and a small role in ‘Sorry, Wrong Number’ for her boss. But those roles will get bigger and bigger – or you don’t know Kristine, who has made up her mind, in all languages, to get to the top.” — Dorothy Manners, King Syndicate Publicity Agent, in 1948.