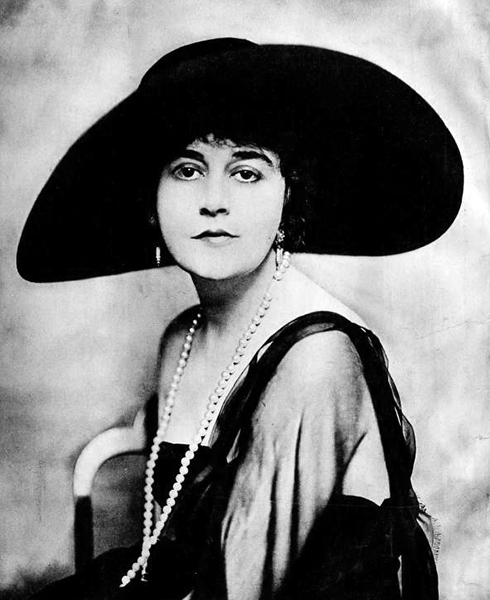 LOS ANGELES – For five years Virginia Pearson was one of the nobility of the republic. She was a movie star. One day an auto skidded into a telephone pole and overturned. The chauffeur was unhurt and a maid slightly cut, but Virginia Pearson was lifted from the wreck with one side of her face cut to ribbons.

Virginia Pearson disappeared from the screen and for five years she was a movie memory. Today she is back in Hollywood with a new face. She says it is really much better than the one she had before. She is telling her old friends for the first time the story of her five years’ absence from the screen – a story of a gallant fight against illness and financial catastrophe.

With a new face, the old screen favorite is again on the movie threshold much the same as she was in 1914 when the stage vampire of  “A Fool There Was” obtained her first real picture with Famous Players.

While Virginia saw nearly a million slip away from her in surgeon’s fees and lost income, many of her former associates outstripped her in the race for fame. But Virginia Pearson prepared to start all over again.

Today, it is hard to visualize the post-accident portrait Virginia Pearson paints of herself. The left eyebrow flapped over the eye. The temple and throat were cut. A gash caved in the cheek and seceral cuts put the chin out of focus. After weeked in a New Rochelle hospital Virginia‘s swollen face was a network of stitches. For a year she was kept from the public gaze. The attack happened during the making of the first picture filmed by her own company. Whenever she could move she would slip into the studio in a curtained car, completing “The Bishop’s Emeralds” without exposing her disfigurement, by turning the good side of her face to the camera.

“People wrote me that I had never before shown such pep,” said Virginia today. “They did not know I was moving fast so the camera would not catch my scars.”

Later she was able to play vaudeville. Then she laid off again to be “sliced up some more.” The back to the stage she went with stitches still in her face. After her wounds healed, there came the painstaking finishing touches removing scars and restoring contour and pliancy. The scars are not now visible in the screen tests and her face is as mobile as ever.

Meanwhile, “Virginia Pearson Photoplay, Inc.” did not weather the years. The last April, Miss Pearson and her husband, Sheldon Lewis, sought bankruptcy personally. They had been making $4,000 weekly, but doctors, beauty treatments, wardrobe and income tax soon depleted their finances.

“However, it is all over now,” said Miss Pearson.

“I believe I look better than I did before the smash, and am ready to resume my screen career.”