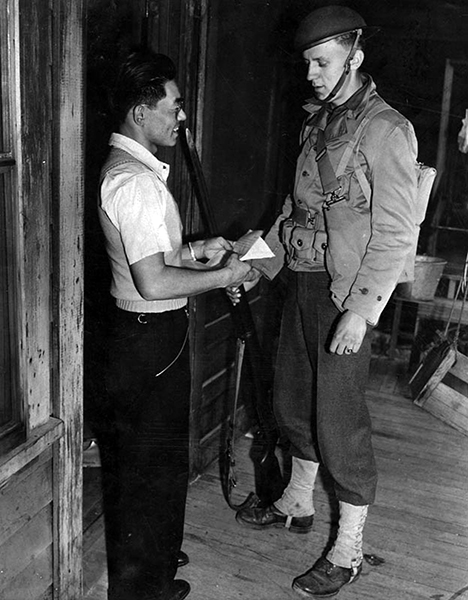 On Febrary 26, 1942, Private Edward Collinash hands an eviction notice to Terminal Island resident Shiro Matsushita. Matsushita was required to leave his home by midnight the following night. The following day, the Los Angeles Times reported on the U.S. military’s Terminal Island evictions in its article: “Japs’ Ouster Demand Rises.” (Note: Bizarre Los Angeles does not condone or promote racial, nationalistic or cultural slurs. We will, however, point it out when we find it in old newspaper articles. That does not mean we agree with it. We are merely citing sources and/or indicating mindsets, however offensive it is to us today, as a point of historical reference.)

Here are a few excerpts from that article:

While the United States Navy was sweeping all Japanese off Terminal Island yesterday, a rising chorus of indignation swelled through California at the continued presence of Japanese anywhere in the state.

The office of Governor Olson was swamped with telegrams, many demanding immediate removal of all Japanese, including American born.

“For God’s sake,” one telegram said, “don’t let official bungling and red tape and other suicidal niceties pussyfoot us into another Pearl Harbor.”

The Navy is using United States District Court and Presidential orders to oust all Axis aliens and all Japanese, whether American citizens or not, from Terminal Island. Midnight tonight is the deadline.

The unrest pyramided when signal lights flashed Monday night while a Japanese submarine shelled an oil field near Santa Barbara.

One thousand Japanese are leaving Terminal Island by midnight tonight. Three months ago 3000 lived there. A month ago a census showed 2200 after hundreds had been removed to concentration camps because of suspicion of subversive activities.

Ninety families with no place to go are being taken to two Japanese language schools in Belvedere and five others in El Monte, Whittier, Compton, Gardena and Norwalk. They will live inside these and in other temporary camps outside until homes are found for them.

Although most farms evacuated by alien Japanese in Los Angeles County prohibited areas are being taken over by their American-born elder children, 250 American farmers have applied to the County Defense Council to operate the vacated farms…most of the American applicants have adequate capital.