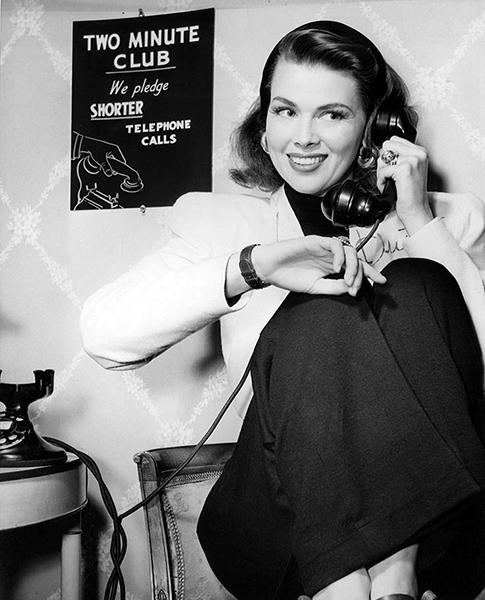 Ruth “Dusty” Anderson was a popular fashion model in the 1940s. Born in Toledo, Ohio, she moved to New York City to embark on a showbusiness career. According to Walter Winchell, while she was in Toledo, she had won a $400 Bank Night prize, which paid for her move to the Big Apple. Other press clippings, however, claimed that Anderson had originally purchased two expensive cameras with the intent of becoming a photographer but had lost both of her cameras in a canoeing mishap. After her unfortunate accident, she began modeling for money. Whether true or not, Ruth Anderson built up an impressive portfolio as a print and runway model before signing with Harry Conover, who owned one of the top modeling agencies in New York.

Conover gave her the name “Dusty” and promoted her as having an outdoors, farm girl beauty.  In June 1941, she modeled military-inspired dresses at Camp Upton, New York. Several days later, she married a Marine Corps Captain named Charles Mathieu, Jr., shortly before he was deployed overseas.

Throughout the second world war, Anderson became a popular pin-up gal who also modeled high-end fashion. Unfortunately, most of her press centered around her faddish “Dusty” name and the marketing brilliance of Conover. In 1943, she was among 15 Conover models signed to appear in Columba Pictures’ film Cover Girl.  While in Hollywood, the girls briefly rented Marion Davies’ Beverly Hills mansion. Anderson also briefly hung out with Errol Flynn.

After filming for Cover Girl ended, Columbia signed Anderson to an extended contract while many of the other Conover models were sent home. She purchased a roadster and rented an apartment. She also took up painting after meeting Romanian/director Jean Negulesco, who taught her how to paint. Columbia cast her Tonight and Every Night and A Thousand and One Nights. In between assignments, she continued modeling and posing for cheesecake studio photos for the studio. By the end of 1944, she was the last remaining Cover Girl model still under contract. She also made uncredited appearances in Negulesco’s films, including Johnny Belinda.

Throughout the war, she rarely saw her husband, who spent most of his time overseas. Newspapers reported that she was looking for a “boyfriend” to help teach her to drive and that she had dated different men, who kept taking her to see the Broadway stage hit Oklahoma. However, truth be told, she had fallen in love with Negulesco.

Then in December of 1944, husband Mathieu briefly returned to California where he was treated at a hospital for malaria. Shortly after newspapers broke the story, she filed for divorce. Immediately after the divorce was granted in June 1945, newspapers reported that she was shopping for a wedding ring for Negulesco. She also landed a major role in the B movie The Crime Doctor’s Warning (1945). But snags in the divorce ruling prevented Anderson and Negulesco from marrying right away.

On July 21, 1946, the couple married inside Howard Hawks’ home. When Negulesco went overseas to direct Mudlark (1950), Anderson took painting classes in Paris. As her film career came to an end, her art career blossomed. By 1951, she had one-woman shows in Paris and New York City. The couple had also become foster parents to a couple of war orphans.

But married life wasn’t as happy as it seems. In 1951, she suffered second and third-degree burns to her forehead after a chafing dish that she had lighted exploded in her face. In 1952, Negulesco complained that his wife did not make enough money from her painting sales to cover her Christian Dior outfits. In 1953, Anderson announced that she and her husband had separated. After making the announcement, she went to a party in Paris where she drank too much, fell, and split her head open.

Shortly after her accident, Negulesco traveled to Paris and the couple reconciled. She continued to work as an extra in her husband’s films, while taking up writing, interior decorating, and painting on the side. Both continued to paint and collect art. Later in life, the couple moved to Spain.