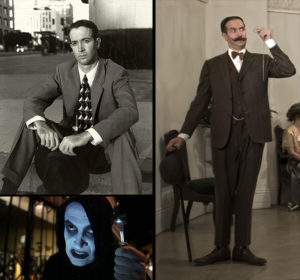 Brian Rohan is an actor with his own cult following. He is also a bit of chameleon. Not only does he moonlight as “Norman Bates” for the Universal City Hollywood bus tours, but he is currently appearing in a one-man show on screen legend James Stewart. But for horror fans, Rohan is also known for his comical ghoul “The Ginosaji” in the cult film short, The Horribly Slow Murderer with the Extremely Inefficient Weapon (2008). Given his love for Old Hollywood and his horror monster status, he was a natural fit for HAUNTED BY HISTORY. He appears in the Alexandria Hotel shoot in Vol. 1 and the Aztec Hotel shoot (in the upcoming Vol. 2).